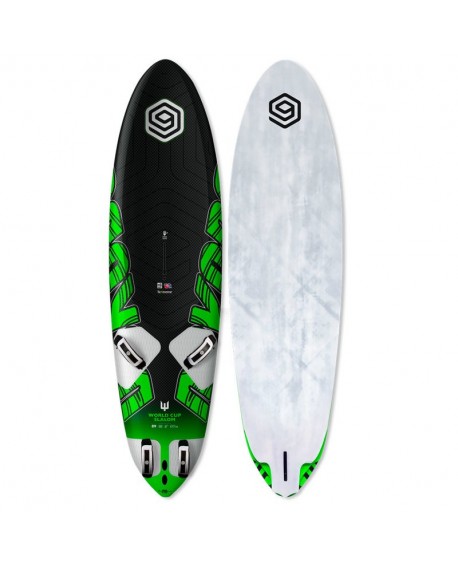 A variety of new and original design and construction features/upgrades are the focus of our new collection.

Designer and shaper Finian Maynard, in close cooperation with our international team of Pascal Toselli, Cyril Moussilmani and Ramon Pastor, has brought to all models, amongst other technical innovations, an all new hydrodynamic back end release system called the "V Star Tail" that gives a new level of  "slippery" water release.

The end result is a world-class burst of acceleration and top speed along with amazing control.

The 2018 World Cup Slalom boards are split into three sectors: the high wind, the medium wind and the light wind. 2 models for each category that fit all the needs of our customers.

"V Star Tail" n plate release system: Behind the fin is the most critical location to gain or lose performance in modern slalom boards. With our new V Star Tail a new level of understanding has been achieved to create what the team believes is a game changer in terms of the potential to reach massive top speeds and insane acceleration!

Newly designed rear foot pads that raise the toe side of the foot to enable more access to the fin power in light wind and also gain control in the strong winds as the back foot remains stable even in the strongest gusts.

"The testing results were blowing our minds, literally board lengths of speed were gained without any loss of control.

Additionally acceleration was also increased, particularly when the gust arrives as the nose stays down and the hyper speed feeling takes over!

The new range of WCSL boards are the masterpieces of our company, whereby we try to bring the racing car F1 look into our sport with boards that are simply more technically advanced than our competitors."